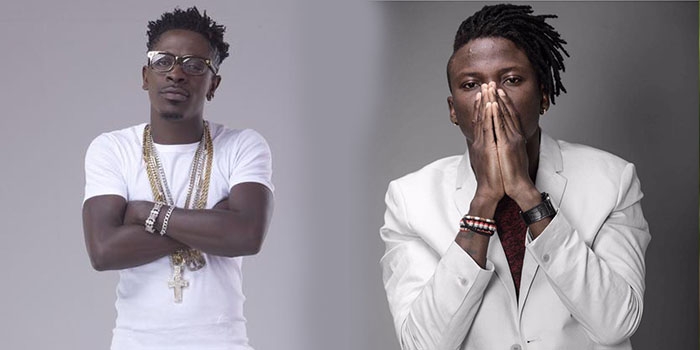 Dancehall artiste Stonebwoy is not laying claim to the unnamed ‘Sergeant Lee’ in Shatta Wale’s street anthem ‘Taking Over.’
The ‘Migraine‘ act told Doreen Andoh on Joy FM Tuesday morning, as far as he is concerned he did “not hear any shots thrown at me.”
The lyrics suggests someone is drinking tea, and claiming to be in a comfortable lead (suggesting a case of delusion), many people believe it is directed at Stonebwoy.
“Sincerely speaking, I chanced up on the Sergeant Lee thing twice. This is the third time I’m hearing it at a very reputable place and I think I have to start wanting to find out its meaning and what its driving at. Listening to the song, sincerely, I do not hear any shots thrown at me or anybody. Some of the other songs might have thrown shots but that’s even allowed once it doesn’t go beyond certain limits. When it gets personal I will go personal too,” explains Stonebwoy.


READ ALSO 👉  Shatta Wale and Betway exposed for allegedly conniving to ‘fake’ the Ghc170k bet slip win (+PHOTOS)
“When you don’t know me personally and you try to make it seem you do then we will have to let you explain. It’s lyrical. The sergeant Lee lyric, if it means something positive then ‘I take am’ but if it doesn’t then I would like to know what they are talking about. I have done a lot and so may be that’s how the person want to praise me. I have also seen tweets where people call others Corporal Nii.”
The rivalry between the two acts has been heightened with Stonebwoy being the only Ghanaian to snag a 2017 Black Entertainment Television (BET) Awards nomination.
Shatta Wale’s attempt to rubbish the awards scheme has been met with scorn by people who troll him for being a local champion.
READ ALSO 👉  Check out the classic stage designed on top of Shatta Wale's swimming pool in preparation for Faith Concert 2020