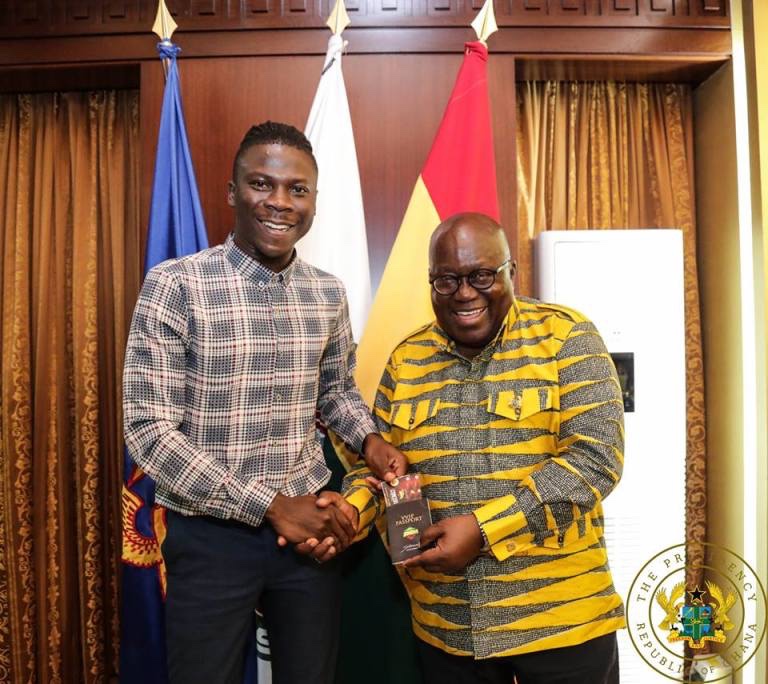 Influential reggae and dancehall musician, Stonebwoy, yesterday 20thDecember, 2018 visited President Akuffo Addo at the presidency to officially invite him to this year’s Bhim concert happening at the Fantasy dome on the 28th December, 2018 at the La trade fair centre in Accra.

According to the president, they also discussed the role of entertainment in the development of a nation as he indicated in his facebook post “Afropop, dancehall and reggae artiste, ‘Stonebwoy’, “President of Bhim Nation”, was at Jubilee House a few minutes ago to invite me to his #FillTheDome Bhim Concert, which will take place on 28th December, 2018, at the Fantasy Dome. We also discussed the role of the entertainment industry in the development of our country.”

The Ashaiman hero is a multiple awards winner that has taken reggae and dancehall from Ghana to other parts of the world. He embarked on a world tour this year that took him to Reggae Summfest; the most celebrated reggae festival in Jamaica and the Caribbean.

He also has a loud voice when it comes to music royalty and the best way to properly structure the local music industry to shape growth and development.  He is the second influential musician to officially visit the presidency in recent times after Shatta wale did during his birthday.

Stonebwoy has great songs like Bawasaba,Most original, Same God, and the latest one Kpokeke featuring his protégé,Kelvynboy.Darkovibes and the rest.

Stonebwoy is an advocate for good governance and democracy as indicated in his songs, “Run go” and “Suit and tie” one of the great songs on his “Epistle of mama” album released in 2017.