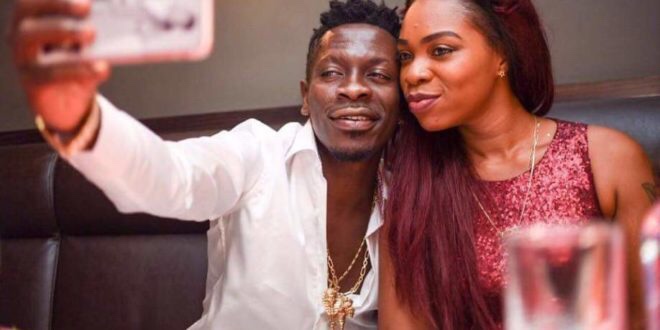 Shatta Wale in a Snapchat post just disclosed that he allowed people to sleep with his ex-girlfriend and baby mama for cash and continued to say that, he’s only worried Michy left because she said she’s tired of doing that business.

For someone like Wale who has no respect for himself, we are not surprised he’s saying this about his own baby mama now that things have gone bad between them and he’s beefing with his former right-hand man, Pope Skinny.

There have been rumours in the past about people smashing Michy and musicians like Yaa Pono, Ara B all said it in songs during the time that they had beefs with him—You know what they say about rumours right? That for every rumour, there’s some bit of truth in it.

It’s obvious that he had no respect for Michy and was only using her for his own selfish gains and once anyone can pay his asking price to sleep with her, he agrees.

A source even told us that, he used to do three-some with his ex-girlfriend Michy and we didn’t want to believe it at the time.

People, this is coming from the horse’s own mouth and we are certain he knows Pope Skinny was going to release that ‘key’ so he’s chosen to spill it before he even does.

With this from Wale, he sort of gives weight to rumours in the past that, he only landed the Zylofon deal because Nana Appiah bonked his girlfriend Michy and that his $1 million mansion was given to him as one of the compensations, which he later gave out to Michy under the disguise as a gift.

“Me I tell you say.. I know my girl dey chop her body so i take am like that… wey she dey do the job for me … make I get small coins” – Shatta Wale said.