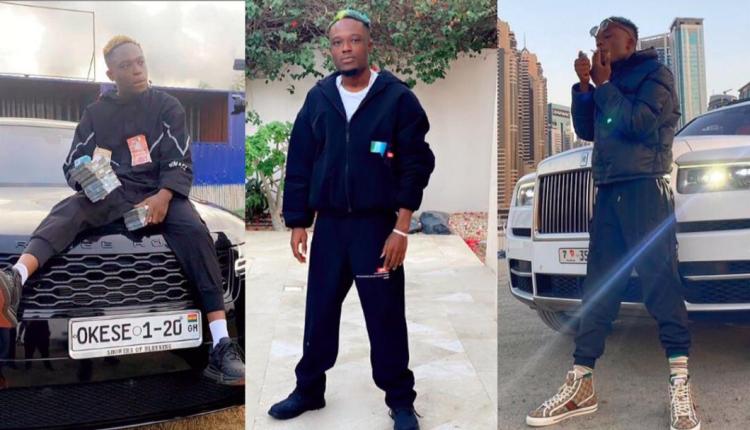 Okesse 1 who made it into the news last three days after his infamous encounter with Andy Dosty in the studious of HITZ FM.

The budding Ghanaian rapper has finally disclosed his other sources of income following the claims that he is a sakawa boy.

Speaking in an interview with Abeiku Santana just this afternoon, the “mmoatia” lead member made it known to the general public that he doesn’t make all his money from his craft hence has other sources which he makes money from.

This was te answer he gave after he was asked by Abeiku Santana if he makes all his money from music, Okese 1 said he has other means of making money.

I make money online. There are several ways of making money and I rely on the online way to make extra cash,” he said in Twi

Abeiku Santana who was clearly surprised at the revelation said how much does he make online for him to live so lavishly with mansions splattered across the country and the purchasing of fancy cars.

I make my money from Bitcoin…Bitcoin is very stable and you can make a lot of money from it. It becomes unstable or unreliable when the person investing does not know his or her way around it.

He also threw light on his recent misunderstanding with Andy Dosty which has gained him some attention in the showbiz industry.

He also threw light on his recent misunderstanding with Andy Dosty which has gained him some attention in the showbiz industry.

The promising artiste said he still does not understand what he did wrong to the host to be treated so coldly.