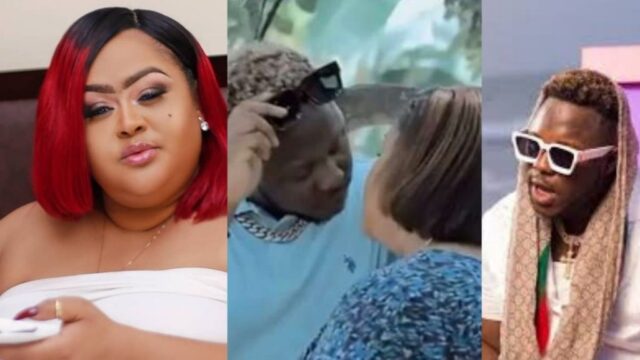 If Fella Makafui sees this sensitive video, she and her husband, Medikal, will undoubtedly have a problem.

Medikal is seen making love to lovely Vivian Jill in a video circulating on social media – he hugged her first, then kissed her.

Despite the fact that the video is believed to be a scene from Lilwin’s yet-to-be-released Cocoa Season Series, fans can’t stop talking about it.

They feel Fella will be furious with how the movie ended.

Watch the video below :

Meanwhile, Kwadwo Nkansah Lil Win, the well-known Ghanaian actor, has dedicated his next television series “Cocoa Season” to all cocoa growers who have contributed to the country’s economic development.

The much-anticipated series, which is set to premiere in the coming days, is an ambitious film production starring Kofi Ardjorlolo, Mr Beautiful, Matilda Asante, Vivian Jill Lawrence, and Ellen White, among others.

Stonebwoy, Fameye, Joey B, DopeNation, Yaa Pono, Strongman, Sista Afia, Reggie Rockstone, and others appear in the series, which is directed by Theophilus Amoabeng.

According to Lil Win, who also serves as the series’ Executive Producer, the film is intended to…..continue reading