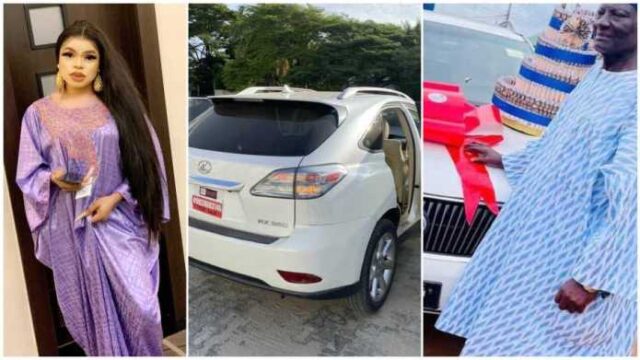 After surprising his father with a new Lexus SUV for his birthday, popular Nigerian crossdresser Bobrisky, real name Okuneye Idris Olarenwaju, has made him a proud owner.

He posted a series of images of the car on Instagram, followed by one of his father standing with a money cake and the automobile.

Sharing the photos, he wrote: “Happy birthday daddy, may you live long for me. I can’t wait to continue spoiling you ❤️”

Since then, photos and a video of Bobrisky and his father at their home have surfaced online, causing social media users to react.

The crossdresser, who is known for his lavish hair and nails, was shown in the video without any of it.

He appeared as plain as he did on his father’s birthday in 2020, dressed in a black jalabia, a black head-warmer, and a black mask.