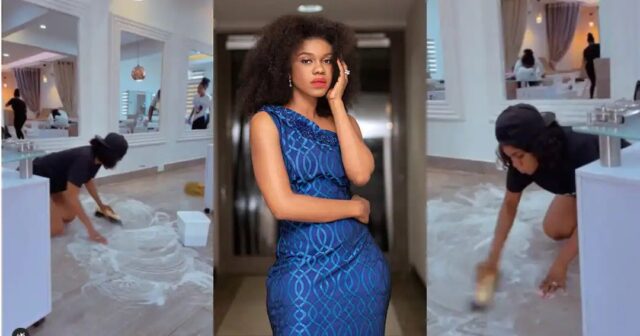 In a new video, Ghanaian musician and businesswoman Becca scrubbed her office alongside her team during a housekeeping exercise.

The Na Wash singer is seen scrubbing with a brush and detergent while bending over on her knees.

In the caption, Becca stated that neatness is a hallmark of their service since they strive to operate in the safest and most hygienic environment possible.

Meanwhile, King Promise, the Ghanaian highlife artist, has established that his footwear, while often large and “ugly,” can cost a lot of money.

Fans might assume his sneakers or shoes are cheap, according to the ‘slow down’ singer, because of how funny-looking they are at times.

Since he donned a particular pair at the 2018 VGMA’s, King Promise’s brand has been synonymous with large sneakers.

With his huge footwear, he was the man of the moment, and many fans were taken aback. Promise has kept the look after the incident, as he has been photographed on red carpets, at events, and even in music videos making dramatic fashion statements with large expensive sneakers or boots.

However, when asked about his massive designer sneakers and the most costly amount he has ever paid for one, King Promise said:

“I hear it all the time. That I enjoy wearing large “camboos.” People might….continue reading