Home ENTERTAINMENT NEWS Thank you, but your $1,800 donations can’t even rent a house –... 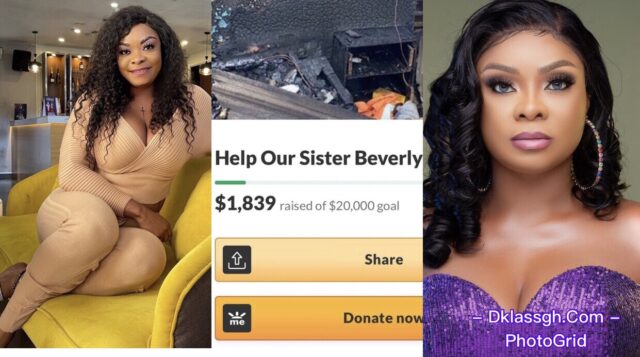 Beverly Afaglo has ordered Yvonne Nelson to shut down the GoFundMe account. This account was set up to raise funds for her after she lost her house to a fire incident.

Beverly Afaglow ent on Instagram to give details of events leading to the ‘mortifying GoFundMe account. How much money is raised, and why she is closing it down.

In the video, she revealed that the account was not her idea, and even her husband opposed it. She also disclosed that the money she has received cannot rent her a house.

“Yvonne Nelson said I want to open a GoFundMe for you. What do you think? I told my management that this is what Yvonne is saying then Management said, why not? People have been calling they want means of support, so if there is something like GoFundMe. Let us go for it. I told my husband, and my husband was against it. Because he is a showbiz personality as well, and he knows how evil the internet is. I went against him and went ahead to do the GoFundMe. Thinking that the love that I was receiving, was going to be the same love that I will receive. But it turned round to hate.

According to Beverly, the moment Yvonne Nelson opened the account, she was bombarded with hate and trolls from all angles.

She also had a local proverb to all the ‘haters’ and ‘trolls’, meaning that man makes money. But it is God that distributes (gives) it. Her family and herself will be fine without public funds.

A week ago, the actress stood by helpless was her house was grazed down to rubbles by a raving fire. In solidarity with her, a few of her colleagues decided to open a public funding system (GoFundMe) to raise money for her.

But this did not go down well with Ghanaians, who pointed out that someone who boasted of her rich father’s properties, cannot beg for money on the streets.