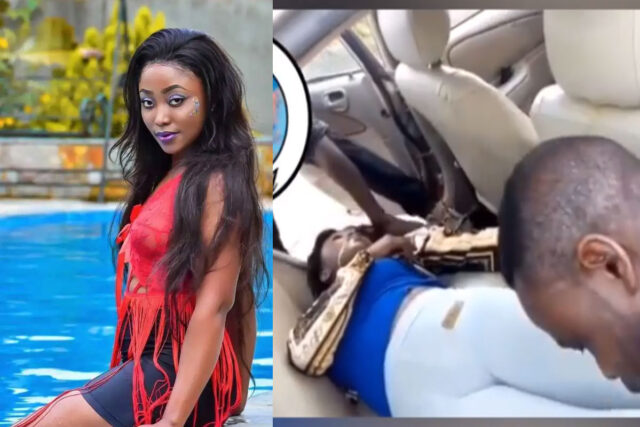 A video shared on social media captures Joyce Boakye being carried by some unknown men and rushed into taxi to be taking to the hospital and some white fluid was dripping from her mouth after allegedly taking some poisonous substances but our source, Mari Gyata did not reveal what exactly was wrong with Joyce Boakye.

You would recall that Joyce Boakye has a messy fight with her former best friend, Mona Gucci over some personal matters and the course of their clash, Joyce shared screenshots of a conversation she had with UTV presenter, Nana Ama McBrown that revealed some marital problems she was experiencing.

Joyce also shared screenshots of Asamoah Gyan begging to be her boyfriend. It is alleged that due to her attacks on her former bestie, Mona Gucci and the humiliation she caused reputable brands like Nana Ama McBrown, she has fallen into depression and decided to end in her life as the video below suggests, whereas others think it is a scene from a new movie she was shooting.

Hmmm Joyce is going tru depression may God strengthen her