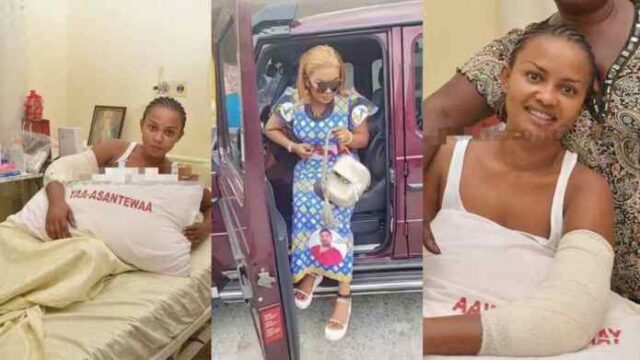 Popular Ghanaian actress Nana Ama Mcbrown has returned to Ghana after undergoing surgery in Germany to repair a deformity in one of her limbs.

The delectable and charming Kumawood actress announced to her adoring fans a few weeks ago that she will take a vacation from work and go to Germany for an operation on her arm fracture, which she sustained years ago in a life-threatening vehicle accident on the N1 Highway in Accra.

“If you recall, I was involved in an accident at Lapaz, Accra, eight years ago. I would not be alive today or have had my arm amputated if it hadn’t been for God’s mercy. Thank God, physicians in Ghana performed an excellent job assisting me in regaining my arm… Last year, I tripped and fell, injuring my arm once more.

Doctors in Ghana worked on me, but I’m not as healthy as I once was. In a video released on UTV’s social media page, she was heard stating, “So I needed to seek more therapy.”

Nana Ama has returned to Ghana in this latest update, and she appears to be doing well. She posted a video of herself stepping out of her G-Wagon for a program and being greeted by several colleagues.

READ ALSO 👉  I'm Sorry, I Love You And I Know You Love Me Too Deep Down Within - Sista Afia tells Freda Rhymz.