Home ENTERTAINMENT NEWS Burna Boy Makes A Grand Entrance In A Spaceship To His Show... 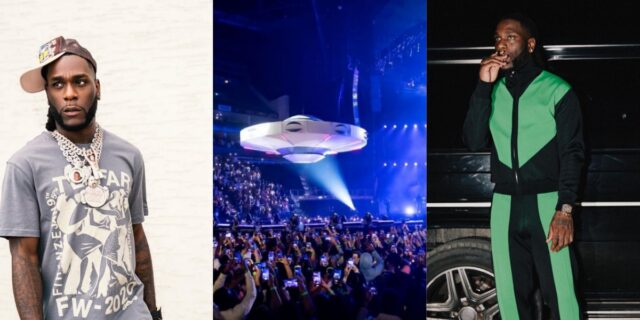 Burna Boy, the African giant made a surprise grand entrance in a spacecraft to his concert at the O2 Arena in London on August 27.

Thousands of fans cheered when the Grammy-winning Nigerian musician came in a spacecraft during his London gig.

Burna Boy initially performed at The O2 Arena in 2020, with famous British artist Stormzy, at the BRIT Awards, but he returned on Friday for his first-ever headline concert.

Some Nigerian artists, including vocalists Omah Lay, Ruger, and Marvins star Rema, performed during the concert, which took place at London’s O2 Arena.

This was in response to claims that the “Badder Than Bad” singer set fire to some flames thought to be an image of Jesus Christ and a book believed to be the Holy Bible a few months ago when some footage went viral on the internet and social media.

Fuse ODG said that he never burned an image of Jesus Christ, but rather one of a white guy imp…continue reading