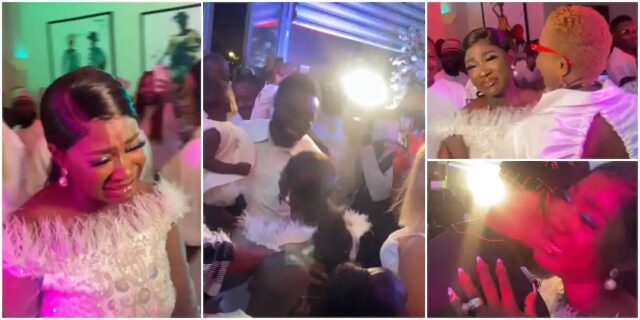 Mercy Johnson’s husband, Prince Odianosen Okojie, ensured that his wife’s 37th birthday was a memorable one by giving her a surprise party.

On August 28, the experienced actress turned a new age, and she came to social media to express her gratitude to God for her life.

That, however, was only the tip of the iceberg. The movie actress went into a location full of friends and coworkers before she understood what was going on, unaware that her husband had organized a surprise party for her.

Mercy was overcome with emotion and burst into tears as she hugged everyone who had come to celebrate.

Richard Mofe-Damijo, a renowned actor who was also present at the ceremony, uploaded a video of the lovely moment on social media.

Mercy’s expression of thanks to her husband was also recorded on film. The actress, who was still crying, went down on her knees in front of the audience to thank her lover.

Meanwhile, Barima Sidney, the singer of “Papa No” and a Hiplife legend, said on Kastle FM in Cape Coast that he had no regrets about supporting President Nana Addo Dankwa Akufo-Addo.

Barima Sidney was seen on many New Patriotic Party (NPP) campaign platforms in the run-up to the recent elections, and he has stated that he does not regret his support for the present government.

READ ALSO 👉  Mercy Johnson Reveals One Of The Most Important Family values She Instills In Her Children.

“To tell you the truth, I don’t have any regrets so far for throwing my weight behind President Akufo-Addo,” he stated in an interview with Amansan Krakye.