Home ENTERTAINMENT NEWS “Chief Imam Was Forced By Bawumia To Donate For The... 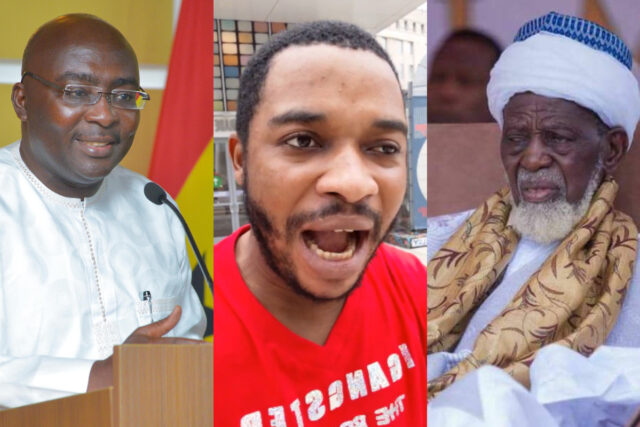 Twene Jonas has accused Ghana’s Vice President, H.E Dr. Mahamudu Bawumia, of being behind the Chief Imam’s decision to donate to the National Cathedral’s construction.

Many people have criticized the idea of building the National Cathedral. The government had previously launched a fund-raising campaign dubbed “Ketewa Biaa sua,” in which they asked Ghanaians to donate at least GHS100 per month to help with the Cathedral’s construction.

The National Chief Imam, Osmanu Nuhu Sharubutu, donated GHS50,000 to the cause, which was made public. This action has been criticized by Twene Jonas as he points fingers at the Vice President for masterminding the proposal.

READ ALSO 👉  "Don't Be Like Twene Jonas, Say Good Things About Ghana When You Have The Chance To" - Mark Okraku Mantey

According to Twene Jonas, the Chief Imam is elderly and may not understand what he does, therefore Bawumia handed him the money to contribute in his name so that Ghanaians would also criticize the Muslim community.

Meanwhile, Benson Nana Yaw Oduro Boateng, also known as Funny Face, the Ghanaian comic actor, has confessed that he has been sad as a result of his baby mama’s activities.

Funny Face was in the news a while back after making claims against his baby mother, whom he said had leaked information to some of his colleagues in the entertainment world in order to destroy his career.

Things got to the point where his baby mama, Vanessa, was forced to leave their marital house with their t…continue reading