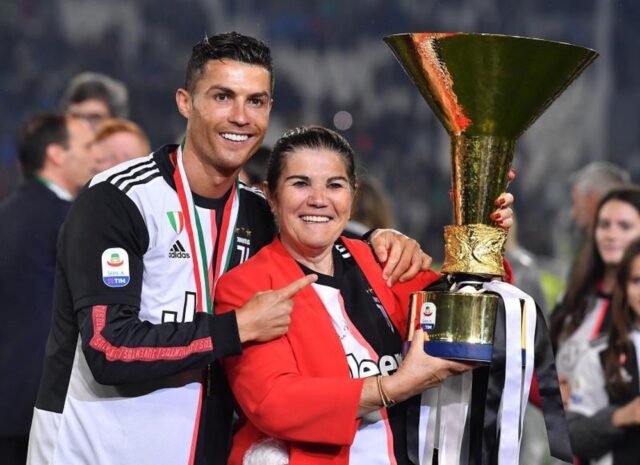 Dolores, Cristiano Ronaldo’s beloved mother, has been banned from attending major sporting events by his famous son, who cited his health as the reason for his decision.

Cristiano Ronaldo is about to make his Premier League debut for Manchester United after rejoining the Red Devils from Juventus. Football fans in England and across the world are eagerly awaiting his arrival.

Cristiano Ronaldo turned down a move to the Etihad Stadium after being contacted by former United manager Sir Alex Ferguson and international teammate Bruno Fernandes.

In their next match, Manchester United will face Newcastle United, and Ronaldo is anticipated to make his Red Devils debut at Old Trafford.

According to a story in the UK Sun and Mirror, Cristiano Ronaldo stated that his mother’s health is his top priority and that he does not want anything to impact Dolores.

In His own words, Cristiano Ronaldo said:

READ ALSO 👉  Cristiano Ronaldo’s Girlfriend, Georgina Rodriguez Gets Him A New Car Worth £150k To Celebrate His 37th Birthday

“I say, ‘Listen, I don’t have a father anymore. I don’t want to lose my mum, too, so you’re not going to watch quarter-finals, semi-finals, or finals.”

Meanwhile, Ghanaian singer, Cina Soul has strongly defended the sexual content of several music videos, urging critics to shut up and let them continue to express themselves creatively by revealing more skin in their films.

“Our visual is one way of playing with different personalities; one minute I’m a character in this film, the next I’d want to wear this, the next I’d like to cover it… Depending on what you see.

“I support abortion rights. There’s nothing wrong with people showing off their bodies in music videos… Cina Sou…continue reading