Home ENTERTAINMENT NEWS Abena Korkor does it again; tw3rks hard on her knees in latest... 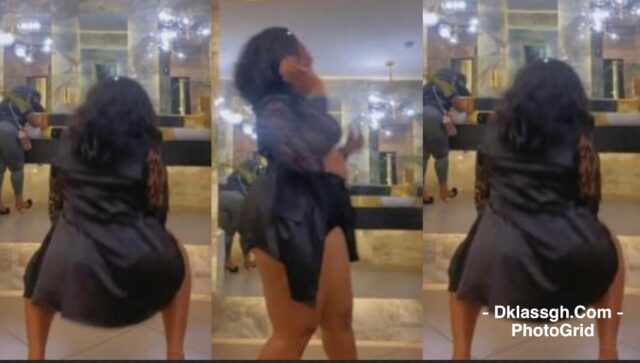 Former Television personality Abena Korkor has dished out a video modeling and posing in different angles for the camera as she flexed her plus-size figure.

Barely a few hours after she shared a half-nu*de video of herself dancing, another video of her twerking in just her panties and bra has been shared on social media.In this new video, the former UCC SRC president aspirant is in tiny green panties matched with a black bra exposing soo much flesh for the camera.

The Bipolar state of Abena Korkor was diagnosed in 2015 when she went crazy and leaked her own nu*de video and photos on social media. She gained national attention with some heavy revelations about top personalities in Ghana

ALSO READ : “I Would Love To Go Out With Dr. Mensah Otabil” – Abena Korkor (Video)

In 2017, she relapsed and she got social media buzzing for weeks with her crazy exposé. She mentioned respected and high profiled people in Ghana who took advantage of her mental state to bonk her. From politicians, entertainers to sportsmen, huge names were dropped in her exposé.

So for her to start sharing raunchy videos on social media again has got her fans worried she might have relapsed again.

WATCH NOW
Drop your Comments Below