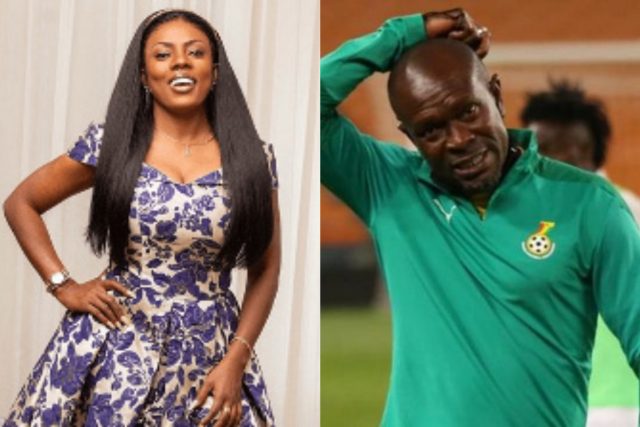 Nana Aba Anamoah, the top journalist, has mocked former Blackstar coach C.K Akonnor after he was fired, stating she would join him so they could bring up their own squad.

C.K Akonnor was fired by GFA yesterday evening, and Nana Aba Anamoah responded by mocking him in a tweet, stating he shouldn’t mind because he’s still her coach and they’ll work together.

Nana Aba Anamoah warned C.K Akonnor in a tweet that they will rip their own team, the Ghana WhiteStars, apart and ask others if they want to join their new squad as she mocks the now-former coach of Ghana’s BlackStars.

Nana Aba is known for making light of important matters in order to relieve the tension that comes with them, and we assume that poking fun of CK Akonnor is simply another method for her to divert attention away from the news of his dismissal.

Some netizens who reacted to Nana Aba’s post said she enjoys making fun of people and important situations, but she doesn’t appear to be a humorous person who enjoys joking about since she usually appears serious.