Home ENTERTAINMENT NEWS Shatta Wale Sprays Money On Medikal In The Heat Of His Performance... 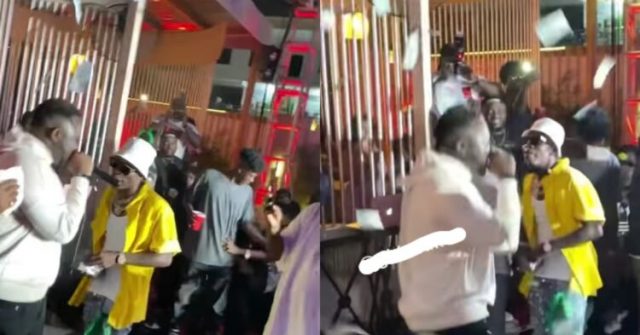 After over-appreciating Medikal’s performance, the “Melissa” hitmaker, who likes showering cash, did so again during Medikal’s hit song “Accra.”

Shatta Wale did something similar in Ada not long ago, when he stopped in the middle of the street and sprayed cash on supporters. However, it appears that Shatta was only repaying a favor this time, as Medikal also threw some cash at him when they met in town a few weeks ago.

ALSO READ:   I Was A Rejected Stone But Now I’m The Corner Stone – Shatta Wale

Shatta Wale went to the platform and began showering cash on him, like he usually does, to demonstrate his love for him. A bag was used to clean up the cash that had spilled all over the stage.