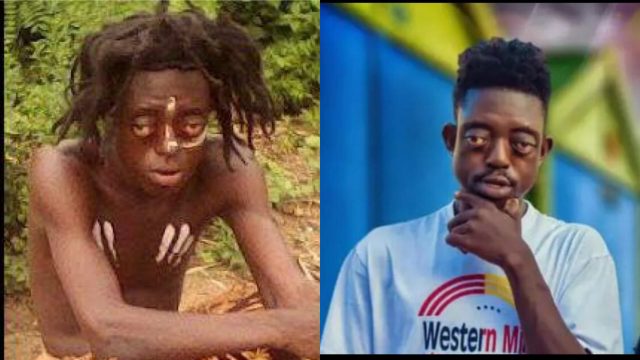 Kumawood actor Kwesi Boateng, better known as Akurugu Baba Yoba in the industry, has spoken out about his experience as a result of being born differently.

Akurugu, who has a disfigured face, alleges that throughout his youth, people teased him since he was created in the image of God.

He told Kweku Manu during his ‘Aggressive Interview’ that he is the only person in his family who was born differently, and that they believe he inherited the look from his paternal side.

He maintains, however, that he was never introduced to his father and that all attempts to open his family’s doors after his birth have so far been fruitless.

Akurugu described some of the punishments he received, including being excluded from school and having no seatmate for his primary time.

“You know, everyone in school had buddies; they ate and did everything together. I have no one like that in my life. I was alone with my thoughts. He complained, “People likened me to animals, yet they never came near.”

The situation was the same at home.

He stated he was kept out of any community activities because he was referred to as a “weak frog.” Mr Frog was his moniker, which he claimed he had till he left his homeland of Asante Asaaman.

ALSO READ:   'Lil Win used my wife and tricked her to run away with my twin daughters' - Funny Face

Residents blamed his mother for giving birth to a river deity in a village where such a thing had never been documented, according to Akurugu.

His romantic life was far from perfect. He revealed how he lacked the self-esteem to even propose to his “crushes,” and how he had no lover at Asaaman despite his age.

He alleges that the trauma he had as a result of insults and curses pushed him to Accra, where he worked in the Kumawood sector.

When questioned if he confronts a similar hardship in Accra, Akurugu said he has now been accepted due to his celebrity and the modest amount of money he has earned.

Akurugu can currently boast about a string of female encounters. He described himself as curvy and light-skinned. In a nutshell, a lady who can complement him while compensating for his physical defects.

He even quipped that he is the most gorgeous man in his own universe and that his eyes are romantic rather than bulging as they are characterized.