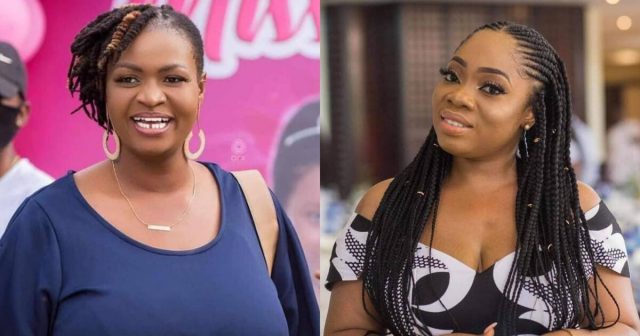 Ghanaian-born-again actress, Moesha Boduong has sent a message from God to talent manager Ayisha Modi, commonly known as “She Loves Stonebwoy,” advising her to be careful with her words and to control her wrath.

In a leaked tape that has been making the rounds on social media, a voice claiming to be Moesha gives Ayisha Modi some advice over the phone.

Following her heavenly encounter with God, Moesha has been gone for months.

The actress dubbed the “Accra Slay Queen,” was known for her extravagant lifestyle and her figure, which she acknowledged to enhancing.

Moesha has expressed gratitude to Ayisha for her love and support throughout her difficult period.

“Thank you very much, Ayisha. I wanted to bring a smile to your face. God bless you, I know you’ve been praying for me. May He bestow wisdom and understanding onto you. Solomon begged God for knowledge, and he received it in spades.

Do you know why you’re constantly aggressive? It’s because you love everyone the same way, and when they don’t do things the way you want, your heart breaks… I replied no no, you didn’t take your time and we didn’t fight over papa. You should have spent more time explaining things to me. When making comments on me, be patient. You may talk about me to get people talking about you, but be patient and explain things to them,” the actress added.

Ayisha Modi has attacked several of the actress’s pals, including Afia Schwarzenegger and Tracey Boakye, in a series of Instagram postings, alleging that they have been spreading falsehoods about Moesha.

She has determined to reveal their nefarious schemes.

The actress, on the other hand, has begged Ayisha to disregard any negative reports about her and instead pray for such individuals.

“You may film yourself sitting with your legs crossed and a smile on your face… Don’t go after those who spread rumors about me. Simply said, everything is in God’s hands. Tell them that God has rescued your daughter and that they should not gossip about her; she will soon come and begin performing God’s work, and we will both do God’s job when she arrives. Moesha said, “Just tell them that.”