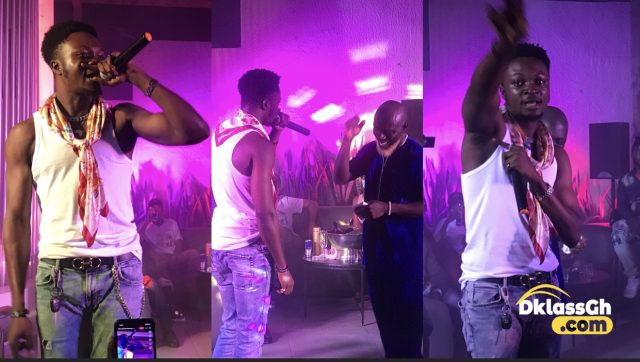 The  Sky Entertainment signee however had a private listening for his Ep yesterday, 30th September, in which many industry players and some fans showed up at Coco Vanilla.

The album listening was such a great one but to Kwame Yogot’s surprise, Sika Aba Fie hitmaker, Kweku Darlington showed up just to help him thrill his fans.

The Kumasi-based drill rapper performed a couple of songs without leaving out his hit track Sifa Aba Fie which features Kweku flick and Yaw Tog.

Kwame Yogot was overwhelmed seeing him though.

Meanwhile, according to Ghanaian artiste S3fa, South Africans view Davido as a “regular” musician, but in Ghana, he is hailed with such happiness and ecstasy.

In an interview with Nana Romeo on Accra100.5FM’s mid-morning show Ayekoo Ayekoo on Thursday, September 30, 2021, the vocally skilled female afrobeat artiste said that while in South Africa recently, she had the opportunity to perform at a show where Davido also performed and was “surprised” at the “normal” response the Nigerian artiste received from the crowd in compari…continue reading