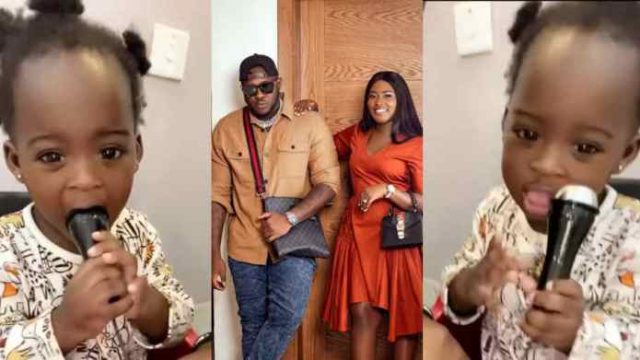 In a recent video, the young child can be seen attempting to while spending time at home with her father.

Medikal was seen holding a tiny microphone and yelling “whaa gwaan” in a video posted on his Instagram page.

Baby Island snatched the microphone from her father’s grip and began imitating his words. Later, she attempted to sing.

Medikal then returned the microphone to his baby girl, telling her to relax so he could sing the chorus.

ALSO READ:   Enough is enough! Mzbel fires back at critics.

The ecstatic little girl attempted to reclaim the microphone from her father’s grip in order to’sing.’

Meanwhile, Reggie Rockstone, the father of hiplife, has revealed the advantages he received following his altercation with dancehall artist Shatta Wale a few years ago.

In an interview with Kingdom FM, Reggie Rockstone said that his Waakye company blew up when the dancehall musician insulted him on social media. He claims that as a result of the incident, he made a lot of money.

Shatta Wale took to his social media platforms a year ago to take jabs at Reggie Rockstone. He explained that he didn’t understand why a well-known figure like Reggie …continue reading