Home ENTERTAINMENT NEWS Groom abandons wife, grinds the backside of his ex at their wedding... 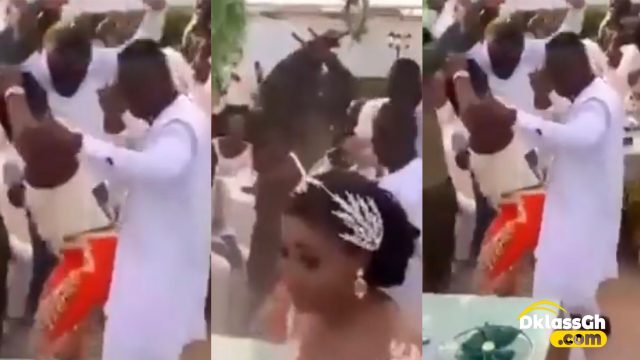 A groom decided to abandon his newlywed wife during their reception by clutching to the huge backside of another woman.

This man could not resist the temptation when he cast his eyes and it fell on a woman dancing so close to them.

The dangling of the woman’s bum coupled with her dance moves gave the man every reason to leave his bride behind, get up from his chair and grab the backside with full force.

The viral video gives an account of a man who was actually enjoying himself at the expense of her newlywed wife.

ALSO READ:   "There was a scene in the Lucky video where I was naked with the model in the shower"-Sarkodie confesses

The facial expression on the bride’s face spoke volumes about her dissatisfaction with the groom’s action. It is believed that the dancing woman is the man’s ex-girlfriend who he left and got married to another.

Therefore, he decided to grind her to put to bed all speculations that there might be something clandestine going on between himself and his ex. That was also his way of saying goodbye to his ex.

His soldier friends cheered him on as he squeezed, smooched and caressed the backside of the lady while the music played. A wedding reception that was supposed to see the groom and bride at the centre of attention took a very interesting turn.

ALSO READ:   "Shatta Wale is a blessing to the music industry" - Joey B

Check Out Video Below: