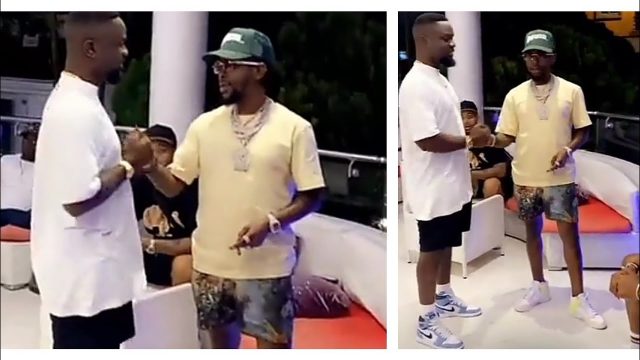 Michael Owusu Addo, best known as Sarkodie, the Ghanaian rapper has hooked up with Jamaican superstar Popcaan, maybe to explore a collaboration deal.

Popcaan stated his aim to get into the Ghanaian music industry as he prepares to release his next album in the nation, as previously reported.

Well, the dancehall king is known to have a good connection with several Ghanaian singers such as Shatta Wale and Stonebwoy, as he was seen in a viral video with them having a good time.

Dklassgh.com has seen a video of Popcaan meeting one of Africa’s most renowned rappers, Sarkodie, to discuss some music-related things, maybe a cooperation contract.

Meanwhile, Ghanaian rapper turned singer, Peter Fameyeh better known in the showbiz circle as Fameye, has disclosed that the GH2.5 million sign-on money from his previous record company, OGB Music, was widely reported in the media never reached him.

The sign-on money, he claims, was utilized by the label, led by Ogidi Brown, to shoot music videos and other music-related expenses, rather than for his personal use.

Even though he has parted ways with his old record company, the award-winning singer stated on…continue reading