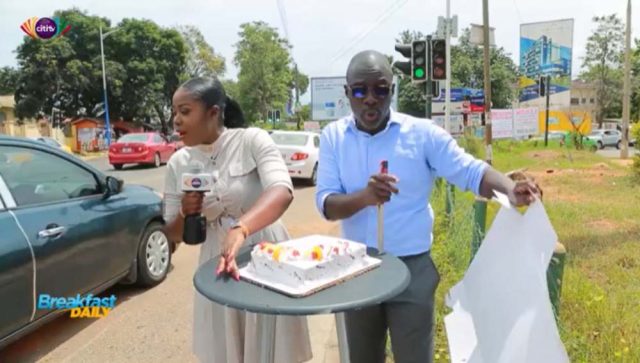 The team of Citi TV’s ‘Breakfast Daily,’ lead by hosts Frema Adunyame and Kwaku David, brought their program to a popular thoroughfare in Cantonments to ‘celebrate’ a pothole’s birthday.

Cantonments is one of Accra’s most affluent neighborhoods, home to some of the country’s most powerful politicians as well as the capital’s administrative buildings.

Normally, potholes are random in shape, but this L-shaped ditch appears to be an abandoned repair project that has evolved into a pothole that poses a concern to vehicles.

Some drivers who were unaware of the ditch were nearly pushed off when they arrived, according to the reporters.

The L-shaped pothole has apparently been there for weeks, and the news crew set up a table right next to the ditch and cut a birthday cake to catch the attention of the proper authorities.

However, Kumawood actor Big Akwes has disclosed why fellow actor Lil Win was absent at the funeral of Bill Asamoah’s mother.

Over the weekend, Kumawood actor Bill Asamoah laid his mother to rest at Daaho in the Asante Mampong District of the Ashanti Region.

The late Esther Owusu Assuming passed on on Monday, July 19, after battling a short illness and was finally laid to rest on Saturday, October 2, 2021, after giving her a befitting funeral.