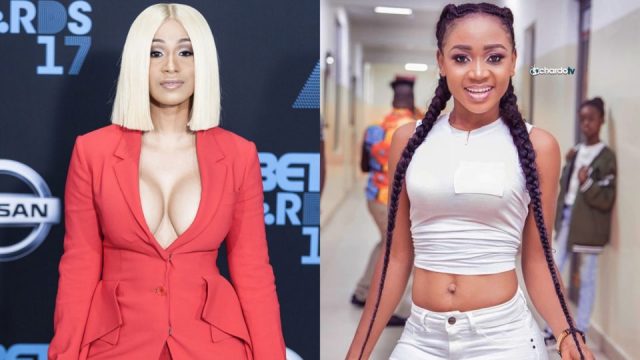 Akuapim Poloo, who considers Cardi B to be her twin sister, was delighted when the American rapper shared her new song on Snapchat.

When Cardi B visited Ghana, she got friends with Akuapem Poloo. And there was a celebrity meet-and-greet. When she realized they had a lot in common, she began to refer to Akuapem Poloo as her twin.

Akuapem Poloo’s song, which has over 11k views on YouTube, was just released.

ALSO READ:   Sandra Ankobiah Reveals Why She Does Not Go To Court Even Though She Is A Lawyer

Cardi B shared images from the song on her Snapchat accounts.

In response, Akuapem Poloo expressed her gratitude for what the American rapper has done for her in a recent video. She also prayed for God’s blessings on her.

Wacth the video below:

Meanwhile, Appietus, one of Ghana’s top music producers and hit factory has identified some of the artists he believes can make the wildest hit songs if they collaborate with him.

Appietus was interviewed on Happy98.9FM’s ‘Ayekoo After-Drive’ show by presenter Doctor Cann, who put Kidi top on this list. Kidi, he claims, devotes his thoughts to the music he does, and for that reason, he admires the artist much.

“I’m a big fan of Kidi. I admire him a lot and would want to collaborate with him since…continue reading