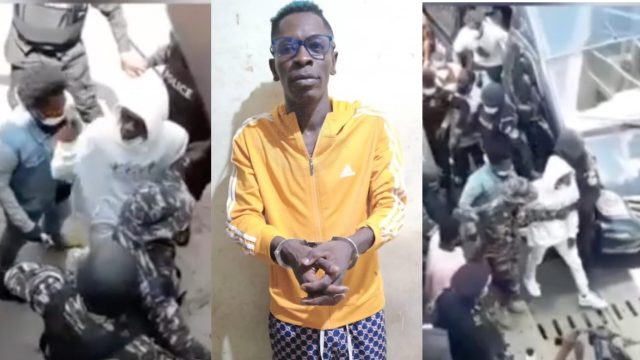 Shatta Wale, today, arrived at the Accra Circuit Court in the company of his two accomplices as they were arraigned before the court over the gunshot hoax they created.

The popular musician has been in police custody since Tuesday night and per the law, he was supposed to be put before the court within 48 hours after arrest.

The police have pressed charges against Shatta Wale which included: the creating and spreading of false news and the creating of fear and panic.

Shatta Wale, his two accomplices: Nana Dope and Gangee and the prophet who made the doom prophecy Jesus Ahoufe had been arrested following the hoax that was created on Monday.

At the precincts of the court, Shatta Wale is seen clad in white hoodie, accompanied by his entourage, fans and people who trooped out to have a glimpse of him.

He is expected to be interrogated, charged and prosecuted if found guilty.