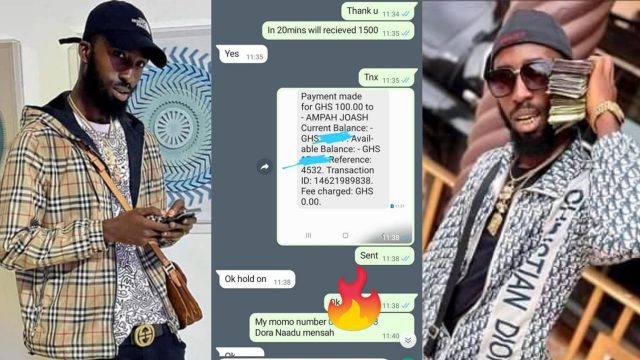 Oseikrom Sikanii, the Kumasi big boy, has been accused of duping a female fan after she connected with him on Facebook and paid him money.

According to the fan, he contacted a fictitious Oseikrom Sikanii page, who instructed her to give GH100 in exchange for GH1,500 in minutes.

The page persuaded her that Oseikrom Sikanii was hosting a giveaway and that she needed to pay him the money to be a part of it.

Screenshots of their claimed communications revealed a needy naive fan attempting to enter a giveaway, despite Oseikeom Sikanii’s reputation as a wealthy young man in Kumasi.

ALSO READ:   Oseikrom Sikanii Debunks Fraud Allegations, Reveals How He Makes His Money Through His Music

According to the female fan, she did not get the money she was promised after submitting GH100 to the alleged Oseikrom Sikanii page. As a result, she’s sobbing because she’s been tricked.

Based on the money he flaunts on social media and the bold remarks he generally makes about having a lot of money, Oseikrom Sikanii is considered a big guy in Kumasi.

As a result, people are likely to create clown profiles in order to fool and defraud naïve admirers.