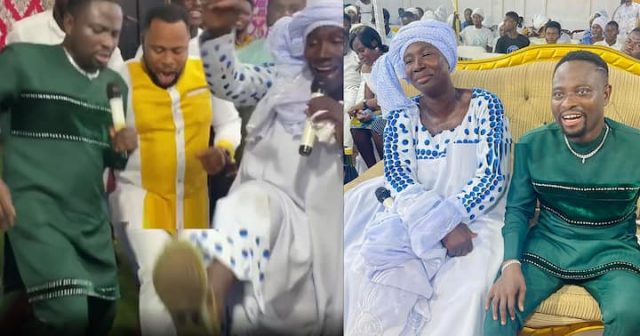 Brother Sammy and Cecilia Marfo,  have reconciled after a long feud. On Sunday, November 6, 2021, the two met at an Ashaiman church activity.

Cecilia and Sammy are seen performing together in a clip from the show. They performed ‘what shall I say in Cecilia’s version, which was just released.

Over a couple of days, Cecilia have a mocking stock for Ghanaians as her video singing the popular gospel song ‘ What Shall I Say” went wrong. She was mimicked by a couple of Ghanaians on TicToc and Ghanaian gospel act Brother Sammy.

However, Brother Sammy and Cecilia have ended their long term beef as they reconcile to person Cecilia Marfo’s version of ‘What Shall I Say’ in an unknown church.

Meanwhile, Award-winning broadcast journalist Nana Aba Anamoah on UTV’s ‘United Showbiz’ show got many netizens praising her for her the show of maturity as she reacted to Abena Korkor’s apology on live TV.

The general manager of GhOne TV despite being hurt by all the things Abena Korkor did to defame and tarnish her image recently when she supposedly had another bipolar breakdown, decided to forgive her anyway.

Reacting to the apology which was rendered to her during the live broadcast, Nana Aba de..continue reading