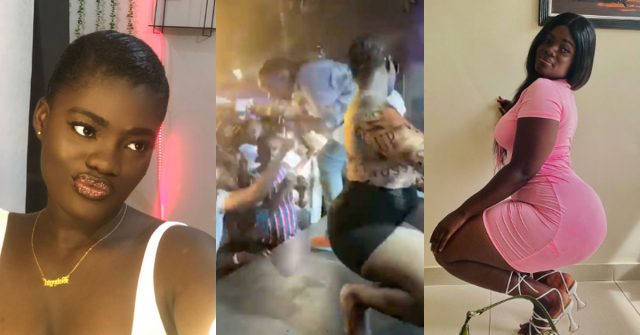 Photographs of the professional dancer and video vixen Stonebwoy stopped a fan from filming her choochkie while dancing has surfaced online.

Sheena Adams is her name, and some of the photographs we found on her Twitter profile confirm why the guy was attempting to feed his eyes with what was beneath her skirt.

In case you missed it, we previously reported that one happy fan chose to overstep his limits while soaking in the thrill of the moment when the singer was performing songs from his extensive repertoire at the Amapiano and Brunch in Accra on Sunday.

When the dancer was displaying her sexiness by lowering her waist to the beat of the music, one fan chose to tilt his camera in a position that would catch the lady’s underpants, maybe with the hope that her coochie would be naked.

Stoenwbwoy swiftly interfered by attempting to capture the phone, but the man held on to it so tightly that he was unable to do so. On the internet, the video to this effect has sparked debate. Take a look at a handful of the reactions we sampled for you.

Below are sme of her pics gathered so far.