Home ENTERTAINMENT NEWS Strongman’s Daughter Steals The Show As She Jumps On Stage To... 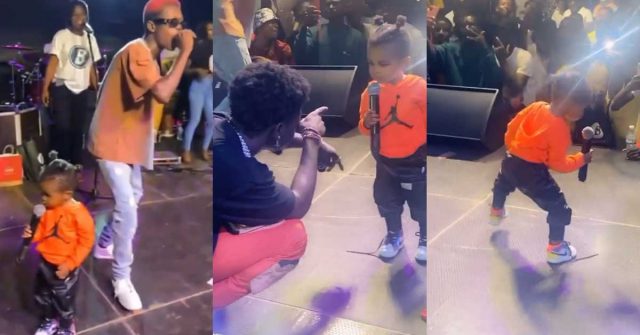 The daughter of award-winning rapper Strongman, Simona Osei stole the show when she went on stage to cheer on her father during a musical performance.

Simona Osei has been mesmerizing Ghanaians with her stunning images for the past two years, and she is certainly a tremendous photo and fashion model possibility.

Simona’s source, her father, Strongman, who is one of Ghana’s most brilliant and well-endowed lyricists, may have the music blood running through her veins.

During her father’s performance alongside Kuami Eugene at an event, Simona came to the stage and snatched Kuami Eugene’s mike to show what she can do on the track. She tried to sing while doing some dancing moves, which elicited enthusiastic applause from the audience.

However, Kuami Eugene, born Eugene Kwame Marfo, a highlife artist, believes it’s unwise to attack him just because he wasn’t able to appear in your song.

Every day, he claims, his management receives many calls requesting a feature with him, but they are unable to match the demand.

People who are unable to secure his participation in their songs should not be discouraged or believe he is a nasty guy.

When Kuami Eugene said this, he was speaking on Kumasi’s Agel FM.

Approaching him should be amicable and brotherly, and not based on their age gap.

“It’s preferable to approach me in a brotherly manner than to assume you’re older than I am.” …continue reading