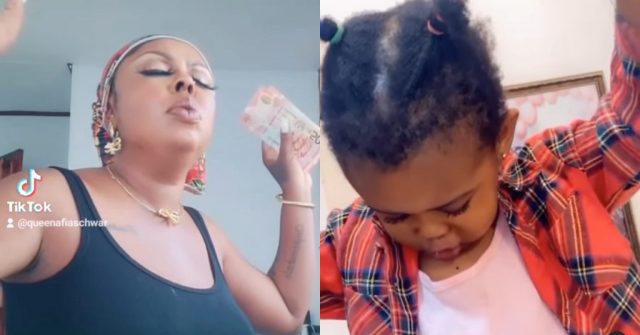 Ghanaian social media star, Afia Schwarzenegger is gushing over Simona Osei, rapper Strongman’s adorable daughter, to the point where she refers to her as her own child.

When she gave her own rendition of Cecilia Marfo’s ‘Whatshaway’ meme in a video shared on her official Instagram page, the little girl, who is barely three years old, managed to shift the pendulum of attention in her direction.

Afia re-posted the video with the following comment: “Eiiiiiii so who is keeping my daughter in his/ her house ??
Pls return her wai.. she is mine.”

Meanwhile,Fella Makafui boasted of having five houses after spending five months building a four-bedroom self-contained home with a customized pool for her daughter Island, adding that they are planning to give her another.

Fella Makafui and her husband Medikal unveiled their new mansion, revealing that it is for their daughter Island, as evidenced by her name being engraved in the swimming pool, and she revealed that this isn’t their first home.

They have more than 5 houses, according to Fella Makafui, and it took them about 5 months to build this one for their daughter, Island. They are looking forward to...continue reading