Home ENTERTAINMENT NEWS “Otumfour Is My Crush And I Wish To Have A Baby With... 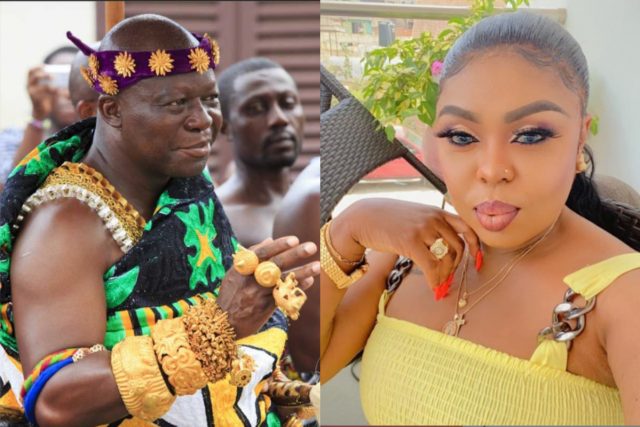 Valentina Nana Agyeiwaa, better known as Afia Schwarzenegger, the controversial social media sensation and self-acclaimed comedienne, has declared that she has a crush on the Ashanti Kingdom Overlord, Otumfour Osei Tutu II.

Afia Schwarzenegger, who has humorously described herself as the President’s wife, revealed that she has refused her statement since she would not inherit anything from his estates in an interview with Gilbert Abeiku Aggrey Santana on the new season of the Atuu program, which has yet to debut.

She went on to explain that she had a thing for the Ashanti King, Otumfuor Osei Tutu II, and that she hopes to produce a child for him one day.

Meanwhile, After a video of her allegedly snubbing him at an event in Nigeria went viral, fast-rising talents Yaw Tog and Gyakyie were seen hugging each other.

When Gyakyie didn’t say anything to Yaw Tog after embracing another person seated next to him in the viral video, some people assumed they had a problem, but they responded that they don’t.

Another video of the two has gone viral, and this time Yaw Tog and Gyakyie hugged and spoke to each other to indicate that nothing is wrong between the…continue reading

ALSO READ:   "Delay Is The Most Stingy Woman The World Ever Produced" - Afia Shwarzenneger

“Mugeez Is The Afrobeats In Africa, Not Wizkid Or Davido, He Needs Support And He Will Do Better” – Showboy

“Whenever I’m Recoeing Music, I Feel Like An Actor” – Kwesi Arthur

“Son I Love You, Be Good Until Mummy Comes Back” – Checkout Akuapem Poloo’s last Message To Her Son Before She Faces her Jail...

“Quality Is Expensive” – Mona4Reall Brags When Asked How must She...

“Whenever I’m Recoeing Music, I Feel Like An Actor” – Kwesi...