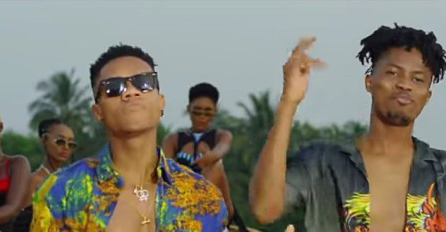 Lynx Entertainment signee KiDi has named rapper Kwesi Arthur Ghana’s most se.xy in response to a photo of him attempting to appear sexy being mocked as the se.xiest boy in Ghana.

Kwesi Arthur posted a photo of himself wearing a top that showed off his figure, prompting KiDi to mock him by labeling him Ghana’s most s.exiest boy or man.

KiDi occasionally goes above and beyond what Kwesi Arthur did, but he’s mocking him since this is the first time a photo of the rapper has gone viral, and he’s always attempted to maintain a low profile.

No one anticipated seeing Kwesi Arthur in this light, especially for someone who works so hard to avoid social media turmoil, and I’m guessing that’s why KiDi is making fun of him.

However, Kidi pleaded with Kwesi Arthur to lend him his se.xy dress so that he could perform with it at his upcoming show in London.