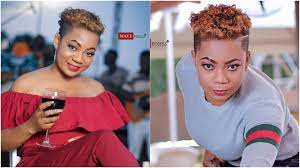 Most of us have been surprised by actress Vicky Zugah’s heavenly voice as she sings praises to God, and we have fallen in love with her lovely and musical voice.

Vicky Zugah is not known for having a lovely singing voice, despite the fact that she speaks softly, and most of us who haven’t heard her songs are just awestruck after seeing this video.

She was singing to worship God by praising him for how great he is, and she has made us fall in love with her heavenly voice, which will make you want to watch the video again and over because you won’t be able to get enough of it.

Based on her prior behavior on social media, Vicky Zugah is the last celebrity most people would expect to have such a beautiful voice to sing and worship God, applauding Him for being magnificent and lovely, and she has just astonished us all.

READ ALSO 👉  I don’t remember any of my ex-boyfriends - Vicky Zugah.