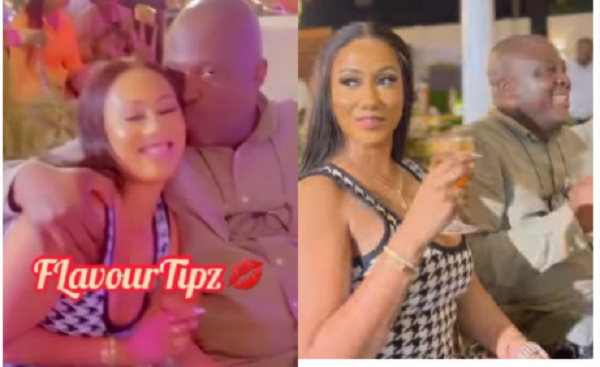 At Dr. Osei Kwame At her 60th birthday party, Ghanaian socialite Mona Faiz Montrage, widely known as’ Mona4Real, ‘was not only seated alongside Ibrahim Mahama but also received a kiss from the prominent businessman.

In other viral videos, Ibrahim Mahama can be seen kissing Mona4Real on the cheeks while they pose for the camera, a behavior that has sparked outrage on social media.

Despite the fact that Mona4Real was there with her best friend, Salma, she (Mona) shifted her seat and sat right next to the wealthy businessman at one point.

Their fears stem from earlier reports that the two were dating. After he was photographed at her birthday celebration in 2020, the rumors began to fly.

There were also rumors that the billionaire gave her birthday gifts, including a Trasaco mansion and a Range Rover. Chairman Wontumi, the New Patriotic Party’s Ashanti Regional Chairman, fanned the automobile gift rumor.