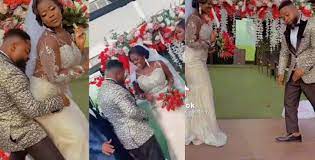 A video of Ghanaian TikToker Asantewaa dancing with her manager in a wedding gown has surfaced.

In the video, Asantewaa, who is married to Jeffery Obiri Boahen, is seen dancing with Cassius in another bridal gown.

Remember how it was rumored a few months ago that Asantewaa and her manager, Cassius, were having an affair after video of them kissing and smooching surfaced on social media?

Asantewaa, on the other hand, came out to dispute the claims, but her followers remained skeptical.

However, the footage of them being married has stirred even more debate.

It’s possible that the rumored wedding is for a music video or a new film she’s developing.

I suppose only time will tell.