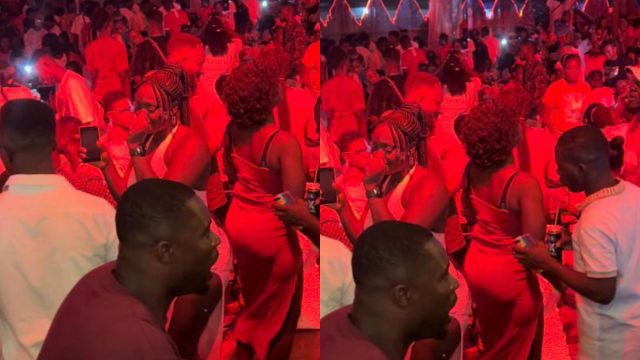 In addition, the residents expressed excitement for the fact that, the initiative has been maintained by the Akufo-Addo administration.

According to the residents, the initiative which was first introduced in 2015 during former President Kufuor’s regime has helped to also become an avenue for promoting made-in Ghana cocoa products and also a source of generating revenue at the local market.

They added that the idea of National Chocolate Day observation has shaped the youth from engaging in sexual activities during Valentine’s Day for purchasing a piece of chocolate as a way of showing love to their loved ones.

The residents made this known at an event organized by Finest Pub and Restaurant located in the locality.

Speaking to the paper exclusively, one resident said, “At first, Vals day was introduced as a day for sex, but the chocolate day introduction has shaped and educated us to the better side of it. We were educated at Finest Pub and Restaurant to purchase chocolate for our love ones, and that, the day is not meant for sex alone.”

Another person also indicated, “Former President Kufour did well for the introduction of the chocolate day celebration, and finest pub and restaurant reinstating the purpose of the celebration to us. It has helped to reduce teenage pregnancy in our locality. Condoms also used to get finished those days but with the education, such awkward actions have been reduced”.

In addition, they called on the government to empower local industries to produce more chocolates while making prices moderate for the ordinary Ghanaian.

The Public Affairs Director of Finest Pub, Nana Kwame Agyei, on his part explaining the rationale behind the program said it was meant to create awareness on the positive effect on the consumption of cocoa.

“The whole week was meant for the chocolate day celebration, meant for the better advertisement on the production of our cocoa and as well meant to sanitize the Assin Fosu locality members. The education and sensitization program elaborated and discussed the importance of cocoa product consumption in Ghana. We gave everybody chocolate. Mission of Finest Pub and Restaurant is meant to teach the youth good moral values, and give them the best of enjoyment, among others”.

The program which was dubbed ‘Finest Chocolate Day’ served as an avenue for the people of Assin Fosu to promulgate the effects of Chocolate day celebration on the youth of the town.

In 2005, the Ghana Tourism Authority instituted The Chocolate Day which has been known as National Chocolate Day to coincide with Valentine’s Day.

The Celebration earmarked on 14th February annually is targeted at boosting the domestic consumption of Ghana-made chocolate and other cocoa-based products and to promote domestic tourism while it gives a healthy orientation to the celebration of Valentine’s Day.

The initiative is as well meant to shift the attention of the youth from engaging in sexual activities towards showcasing love to their loved ones through a gift of chocolate.

The initiative was instituted by the Ghana Tourism Authority in collaboration with the Cocoa Processing Company of Ghana.

This was part of the memorial [email protected] celebrations by the then Minister of tourism Jake Obetsebi Lamptey.