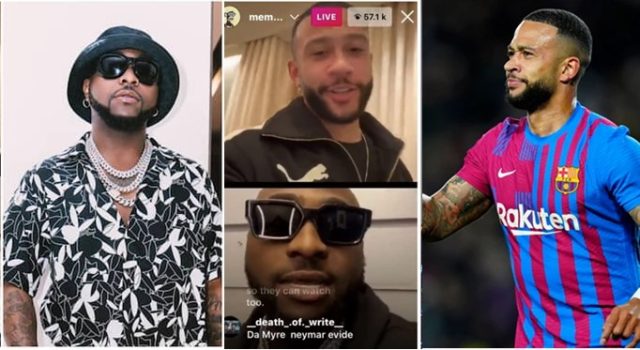 Davido had a session with Barcelona striker Memphis Depay before his much-anticipated concert at the historic 02 Arena in London, where he intends to rewrite history.

The two, who referred to each other as brothers during the Instagram video live, are brand ambassadors for the sportswear company Puma, which Davido cordially welcomed into the Puma family.

Depay was then formally told by Davido about his upcoming performance at London’s O2 Arena on Saturday. The “Aye” singer also let the Dutch star know that he was going shopping before the show.

The head of the 30 billion gang and owner of a record company also stated that he plans to go down to Spain to see one of Depay’s games. For his part, Depay offered to give him an outfit from an upcoming collaboration.

“I’ll come to Spain and we’ll have to hook up because Aubameyang is also my brother,” Davido is heard saying. It’ll be wonderful to meet you guys over there because I’m now in London.