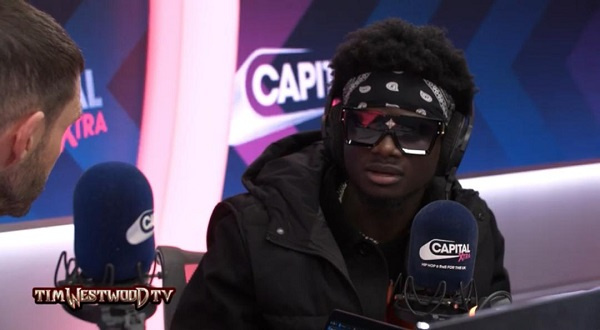 Kuami Eugene is seen freestyling on beats being played in a more than 7-minute video released on the popular DJ’s official YouTube profile.

He uses a little of the native language, Twi, in his flow, but mostly raps in English.

Most musicians see Tim Westwood’s freestyle session as a worldwide chance, yet a poor performance might result in trolls.

Kuami Eugene has received a lot of accolades from his fans for his performance on the world stage.

The singer was recently in the United Kingdom for a major concert with KiDi, a fellow musician.

The pair played their famous tunes in front of over 2,800 people in London on March 6.

In terms of their music careers, the artists have expanded their wings to perform their great songs and interact with fans outside of Ghana.

Patoranking, Sarkodie, Kwabena Kwabena, and a slew of other artists joined the two performers on stage to put on a concert to remember.