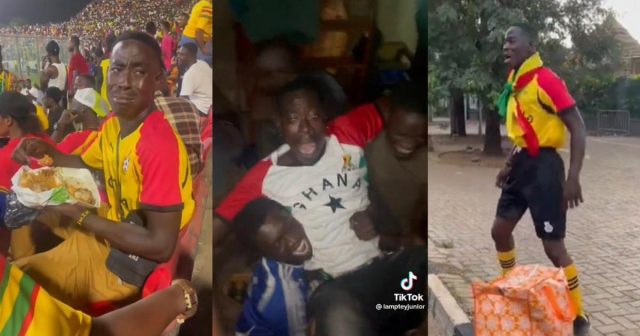 A Ghanaian football fan who became popular on social media during Ghana’s double Qatar 2022 World Cup playoffs will receive an all-expenses-paid ticket to the event.

The unidentified fan was photographed eating and sobbing during the first leg at the Baba Yara Stadium in Kumasi.

In another video, he was seen celebrating after the Black Stars beat Nigeria in the second match to qualify for the World Cup.

After the video went viral for his antics, former Ghana U20 player Karim Sadat noticed it and revealed that a friend of his is interested in financing the fan’s trip to Qatar for the World Cup.

As a result, the Halmstads forward used his Twitter account to appeal to the general public to assist him in locating the aforementioned fan.

“Please help me find this gentleman. A friend wants to sponsor him to Qatar for the World Cup,” the footballer tweeted.