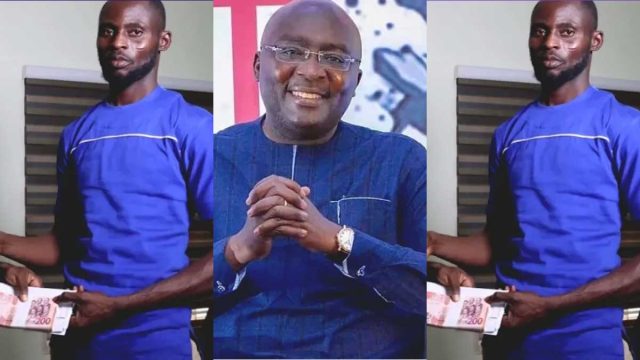 When taxi driver, Kwesi Ackon, returned GH¢8,400 a passenger left in his car, he did not know that his honesty was about to pay off.

Vice-President Dr. Mahamudu Bawumia donated GH¢20,000 to him after his act of honesty went viral.

On Wednesday morning, a video surfaced on social media of the moment Mr. Ackon returned the money to the owner. The owner of the money and her family are seen in the video weeping and thanking the taxi driver for saving their lives.

One of them is heard saying they could not sleep because of the missing money.

Touched by the video and the taxi driver’s honesty, the Editor-in-Chief of The Fourth Estate, Manasseh Azure Awuni, suggested on Facebook that something be done to reward the taxi driver beyond words of appreciation.

Among them was Vice President Dr Bawumia, who donated GH¢20,000 to reward Mr. Ackon for his honesty and exemplary show of integrity.

Manasseh presented an additional GH¢2,500 from two other unnamed donors, making the total of GH¢22,500.

It pays to be honest, they say. But Kwesi Ackon did not believe it can be that literal.

On Easter Saturday, Isaac Ackon pulled up at the Malata market in Accra New Town. It was 8pm and a potential passenger had flagged him to a stop.

She wanted a taxi to Teshie. After negotiating a fare of 40 cedis, Isaac began a trip aimed at making sales to feed his wife and three children.

Isaac’s car is a rusty Nissan registered in 2013. Fumes from the pipe reveal a tired engine. He says because the car is old, it is hard to get passengers especially as taxi-riding services like Uber threatens to blow his taxi out of business.

He says there are several days when he makes losses and in a good week, he can make GH¢300.

On that Easter Saturday, after ending another day, he was checking through his car when he found a cloth tied over something. The cloth was dirty, like a rag. It smelled of fish. “I wanted to throw it away,” he told The Fourth Estate.

But restrained by a little curiosity, he unwrapped it and found several notes. It was money. “I didn’t count the money,” and neither did he count himself lucky.

He knew he had to return the money. He knew it must have belonged to the woman he picked at Malata Market. He said he couldn’t have returned the money immediately. It was already dawn.

On Easter Sunday, after worshipping at his church, The Church of Pentecost, he drove to Teshie and reunited with a weeping trader with her money.

Asked what pushed him to do it, he said his religion, Christianity, did not permit him to do otherwise.

“If you are a Christian, you should always differentiate yourself from non-Christians,” he told The Fourth Estate.