Home ENTERTAINMENT NEWS “This one is an upgraded Kelly” – Reactions as a Video of... 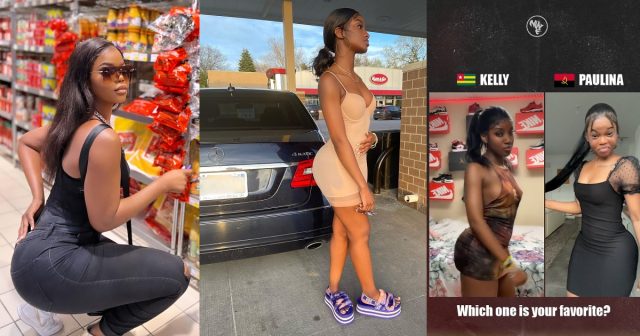 Kelly, a Tiktoker who achieved ‘social media celebrity’ status in Nigeria after her videos went viral might be seeing her endearing tenure come to an abrupt end as a video of another endowed lady has surfaced online and streets are saying the new lady just might steal the spotlight.

However the emergence of another beautiful and curvy lady has left fans with a dilemma as regards choosing who the more sexy Tiktok queen.

It has now come down to choosing between Kelly who is a Togolese and the lady identified as Paulina who hails from Angola.

See the video below and the comments that followed ;

Paulina has bigger dancing parts. Oh how my foolish heart, loves to ride the donkey

greenlife.ilove wrote;
Togo knows that the body can shake but Ango looks like handmade

Paulina isn’t doing anything but she is allowing her bigger backside speak for her. We love to see it.

She will give Kelly a run for her money with that backside. Kelly is no longer my fave abehg.