Home ENTERTAINMENT NEWS ‘He Is My Husband’ – Woman And Her Children Disrupt Her Husband’s... 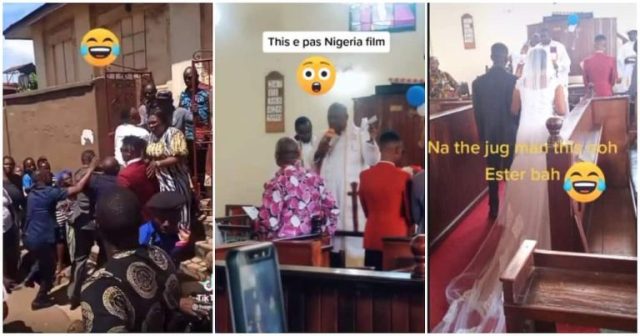 A viral video showing a woman and her family breaking into a church wedding where her husband was marrying another woman has captured the attention of many viewers.

In the video, the first wife is shown presenting church officials with proof that the man was still legally wed as well as their children to show that they are still husband and wife.

The incident happened over the weekend in Sierra Leone and the woman’s “new wife,” according to sources, was her main bridesmaid.

Internet users from Sierra Leone said that the purported best friend and new wife performed black magic on the first wife to make her mentally unwell whenever she went to her marital house.

Speaking on the incident, @allthingsanto wrote: “I’m a Sierra Leonean. Let me add something. And new wife happens to be best friends with the “ditched” first wife. They ate together, did everything together. Okay y’all know what besties do now. First wife proves to be fine and ok every time she’s at her family house but as soon as she goes to her matrimonial home, she runs mad. Sad!

“Info gathered from an interview that featured the elder sister of the first wife.“

Also speaking in line with multiple reports on the new wife and tagging her the lady’s bestie, another netizen @lubr_ian said: “Stories have it that the bride was infact the chief bride’s maid at the wedding of the first wife and the groom. The bride allegedly did black magic that will make the first wife go mad any time she enters her matrimonial home.”