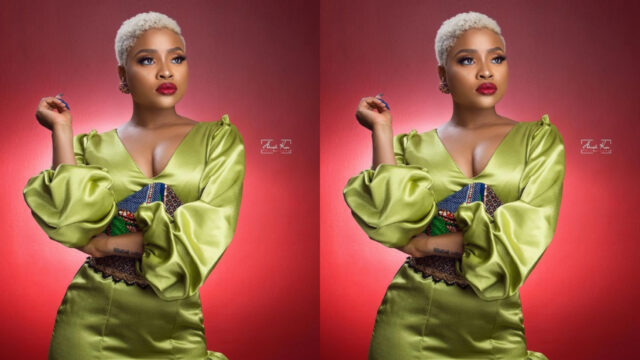 Adina said that she joined the record label in order to amplify two brands, Lynx entertainment and New African Movement, in an interview with Larry Bozzlee on CTV’s Time with the Stars (NAM).

She continued by saying that her group discovered that Lynx Entertainment was a better fit for how they worked together.

“We all know Lynx is a powerhouse. They do amazing and from experience, we from NAM realized that we work really well with the team at Lynx. We’ve done a lot in Ghana, we’ve been able to reach a lot of corners and we felt it was time to take things to the next level. It was time to break out of Ghana.”

“Break out of Africa and do bigger and better things. And as we knew that we were working well with them in the back, we were like, okay, let’s make it official, and then let’s carry this brand even further high together,” she explained.

“I’ve always been working with the Lynx team. I was always collaborating with Kuami Eugene, KiDi on my projects. So KiDi would write ‘Makoma’ for instance or ‘Sika’. We worked collectively on a lot of my projects and I actually use their studio a lot. So we’ve always been family. I’ve got a relationship [with them] that dates back to like 2008 or 2009 with the team. Same as the head of the New African Movement. So we were just a family. The signing was just putting pen and paper to say let’s make this official.”

Reacting to assertions that she’s gone back on her word not to leave her so-called former team New African Movement (NAM), she cleared the air, “I haven’t left NAM. So basically, I’m signed to Lynx as an artiste but I went in there with my management team. So management team which is NAM is still part of my deal. So it’s basically what I was doing that I carried everybody with me and now we are part of Lynx. So Lynx is the label and my management team is NAM, under the label.”

“That’s why I said we joined forces to make the brand amplify because we knew what we were doing before. They [Lynx] also know what they are capable of. Now, these two people have come together so no matter what you do, there’s no loss for the brand because we [NAM] are working, they are working – everybody is making it come together nicely. So I’m still with Mr. Farkye,” she went on.