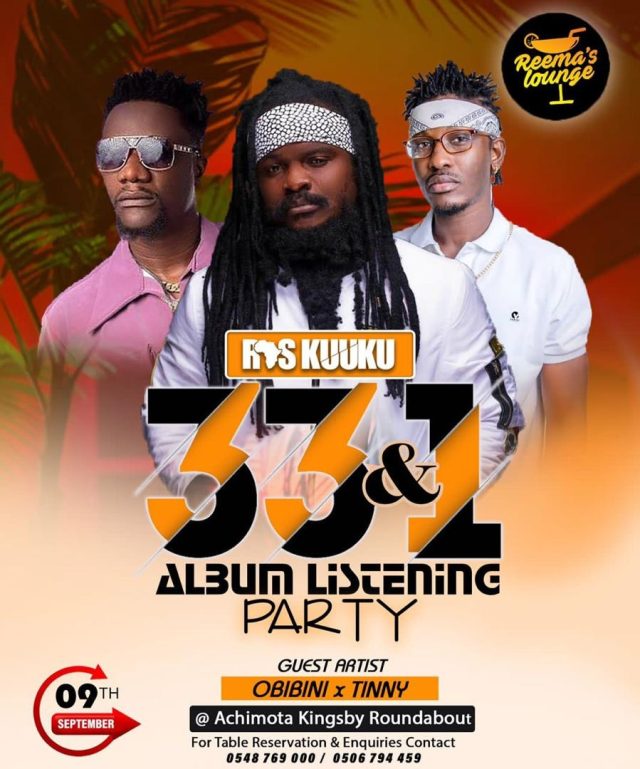 He enlists his close associates Tinny and Obibini as major guests for the listening party as he posted an official promo flyer of the event on social media this week to break the news.

Event will be held on Friday, September 9, 2022 at Reema’s Lounge in Achimota near Kingsby Roundabout. For further details and reservations, kindly contact 054 876 9000.

“3, 3 & 1”, title track for the Album is the only Reggae song off the album with a blend of Afrobeats, Hiplife, Highlife et al, so he cuts across different markets with the record.

The new Album “3, 3 & 1” was released on July 30, 2022 via MiPromo Distribution services. The Album has 7 songs listed for it. He featured 5 artistes on this catalogue namely Kuami Eugene, Fameye, Paa Kwesi (Dobble), YPee and Kobi Trice.

With real name, Jonas Kojo Kurankye, Ras Kuuku has been on the path of music since the early 2000s and has scored some enviable feats and played some of the prestigious music stages from Ghana to USA, just to name a few.

From getting multiple nominations and winning awards at Bass Awards, 3 Music, Vodafone Ghana Music Awards, Ghana Music Awards USA, Ghana Entertainment Awards USA, and a host of others, he has been able to ink his name in the Ghanaian Reggae/Dancehall fraternity as one of the Music icons defending the genre while staying true to his core roots in Highlife, Hiplife and Afrobeats as well.

With previous features with other heavyweight artistes like Stonebwoy and Kofi Kinaata, one would agree Ras Kuuku didn’t come from an easy hole.