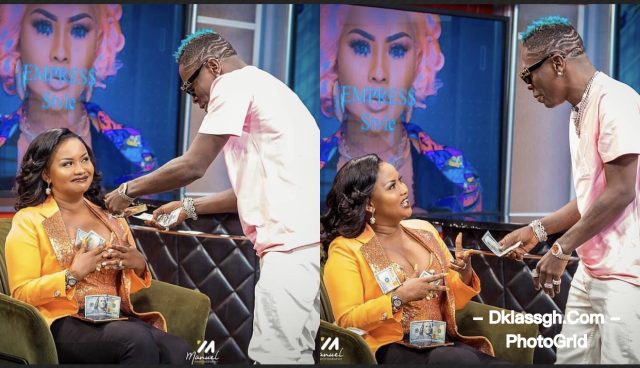 The UTV United Showbiz Host was denigrated by Shatta Wale in the most recent vicious assault, who called her an inept person who was working for the TV network for no apparent reason.

as suggested to Dr. Osei Kwame by Shatta Wale Nevertheless, he needs to fire Nana Ama McBrown and replace her with college grads who are more familiar with the present state of the entertainment industry.

The choice to hire McBrown is a massive “NO-NO” for him, even though Shatta Wale praised Dr. Osei Kwame for giving young people the opportunity to find work.

In one section of the video, Shatta Wale is heard saying, “You people are villagers; all your programs are rubbish; Nana Ama McBrown doesn’t know anything about presenting.”

Despite Nana Ama Mcbrown’s best efforts to avoid engaging in public drama, she could be compelled to respond to Shatta Wale’s critical remarks, which could cost her job.

It’s terrible that Shatta Wale tends to criticize everyone but himself. We can all remember when Shatta Wale appeared on the same show and gave Nana Ama some dollors and a phone. Does this imply that Shatta is confused and inconsistent, as Arnold Baidoo claims?