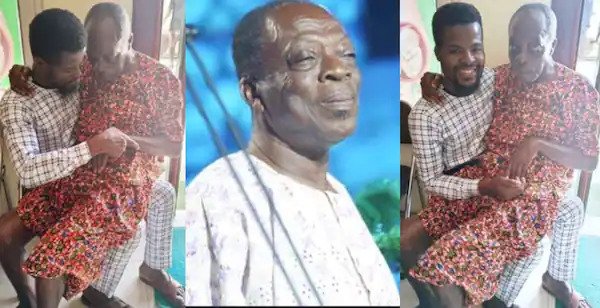 Many Ghanaians have been saddened by the appearance of a picture of veteran Akan Drama actor Kohwe, also known as Kofi Laing, on the internet.

The actor seemed to be quite sick in a photo seen by Dklassgh.com on Sankofa Radio’s verified Facebook page and is seen seated on the laps of a young guy whose identity was not revealed. The post was posted by Sankofa Radio with the following caption:

Pray for “Kohwe”, the legendary actor. He is now under treatment at Dr. Power Herbal Clinic

While the nature of his illness was not revealed, the elderly veteran actor appeared frail in the photo, with his limbs appearing numb. Ghanaians who saw the post expressed their condolences to the legendary actor in the comments section.

Some looked to be upset that a photo of an ill person was being spread online, while others appeared to be sad and wished him well.