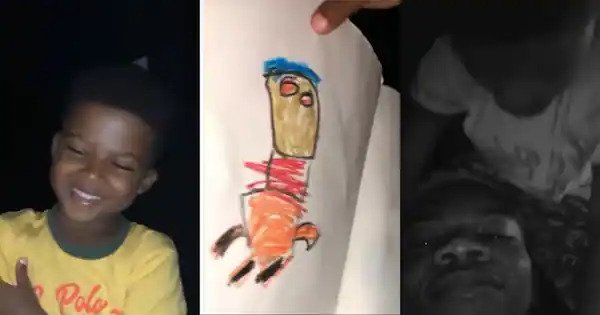 Kidi, the multi-award-winning musician, and his son, Zane, have sparked a social media frenzy with a fresh father-son encounter.

Kidi and his son were seen spending quality time together as the Say Cheese singer chose to take a brief sleep in a new video seen by Dklassgh.com on Instagram.

Zane, on the other hand, was not willing to let his father fall asleep and kept bothering him in an attempt to wake him up.

Zane also showed his father a sketching project that he had been working on for a long time in another segment of the video.

According to Zane, the colorful drawing was his duplicate on paper, and he was quite pleased with his work when he presented it to his father. Kidi was taken aback when he saw his son’s artwork and screamed “wow” to convey his awe at the fact that he had made an effort to depict himself.

Following that, Zane was seen nearly sitting on his father’s head, pleading with him not to close his eyes.