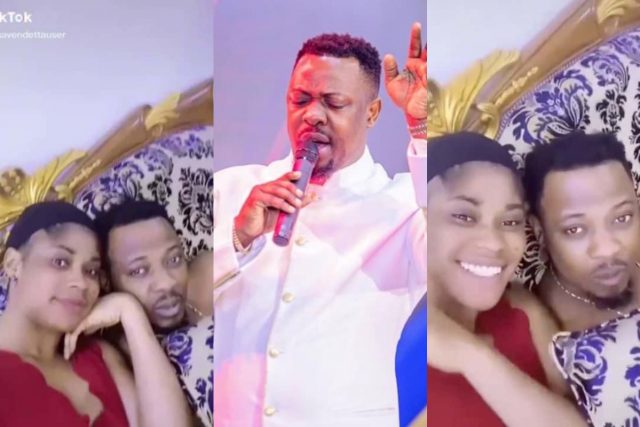 Founder and Leader of the Prophetic Chapel Hill, Prophet Nigel Gaisie has responded to the viral footage of him being shirtless with a Tik Tok slay queen by claiming the girl is his blood sister’s daughter.

In an interview with Kofi Adomah Nwanwani, Nigel Gaisie said that people accusing him of sleeping with women in his church had no evidence, and then this footage of him being shirtless in this lady’s Tik Tok video went viral.

In response, Nigel Gaisie said that the lady at issue is his blood sister’s daughter, Sandra Mantey and that we should disregard those who are attempting to bring him down, referring to them as “wicked individuals.”

He went on to say that they don’t know anything about him, so this is what they’ll do to make him look terrible: by calling them “hilarious people” and releasing a video with his blood sister’s daughter to suggest he has anything to do with her.

Nigel Gaisie has warned that if he is attacked this year, he will not remain mute, and we assume that’s why he replied to this viral video to clarify that the little girl referred to as a “slay queen” is his blood sister’s kid.

READ ALSO 👉  Russia-Ukraine crisis: I prophesied about this war, a lot of harm is on its way coming – Nigel Gaisie

Watch the video and Prophet Nigel’s response below: