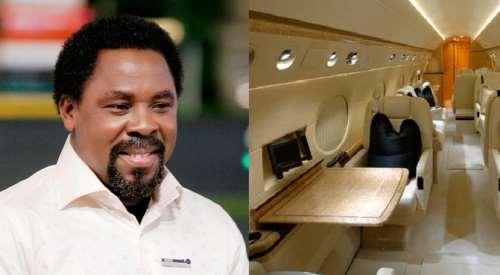 According to reports, the late Temitope Balogun Joshua’s private plane has been put up for sale by some of his pupils.

According to the source, the Synagogue Church of All Nations (SCOAN) is facing yet another problem, as a fresh finding reveals that some of the church’s members have taken the late prophet’s assets and are selling his private plane.

Elder Emmanuel Kayode, a member of the SCOAN church, informed a Punch reporter that the late prophet’s ex-aide had also stolen some of the church’s assets while transferring money from its overseas partners to an illegal church account.

ALSO READ:   #BBNaija: Whitemoney Is Passionate About What He Does, He’s Not Faking It - Queen Reveals

According to Kayode, the only individuals to blame for this abrupt turn of events are the deceased cleric’s “errant prophets, prophetesses, disciples, and evangelists.”

“Times are changing,” he remarked. Surprisingly, the church at Agoda Egbe’s Prayer Mountain, which was intended just for prayers, became their home. They abandoned their formal lodgings in the church and went to the mountain, where they were living large with their entourage.

“The Prayer Mountain was shamefully and gradually becoming a location where they had parties, conducted their business, and conducted their private affairs– something that was never done when TB Joshua was alive.”